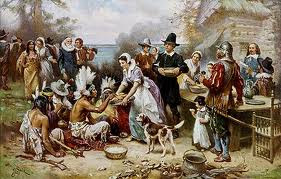 I firmly believe it is the memories we create in our house that make it our home. With two teenage daughters, I am always looking for some fun conversation starters to introduce at the dinner table. In my search I ran across some great trivia. I plan to stump them all at our Thanksgiving dinner..right!

What is the name of the famous rock where the pilgrims landed?
Plymouth Rock

The Indians invited to the Thanksgiving feast were?
Wampanoag

What is the name of the ship the pilgrims came over to the United States on?
Mayflower

What is the name of the Captain of the Mayflower?
Christopher Jones

Who was instrumental in declaring Thanksgiving Day a National holiday?
Sarah Hale

What is the original name for pilgrams?
Puritans

What part of the turkey that is broken that is considered good luck?
The wishbone

Indian corn should only be used as decorations and not for cooking?
True

What year did the first Macy's Thanksgiving Day Parade start?
1924

What year was the first Thanksgiving?
1621

Who was the first President to pardon a Turkey?
President Harry Truman

Name the first balloon in the 1927 Macy's Thanksgiving Day Parade?
Felix the Cat

How many pilgrams came over on the Mayflower?
102

How long did it take the pilgrams to travel from England to the United States?
66 days

What was the Mayflower originally designed to carry?
Wine

How long did the first Thanksgiving Day last?
One week

What football teams played in the first Thanksgiving Day game in 1934?
Detroit Lions vs Chicago Bears

President Bush pardoned two turkeys in 2005. What were their names?
Marshmellow and Yam

Of the 102 pilgrams that came over on the Mayflower only half of them survived to attend the first ever Thanksgiving dinner. We have much to be thankful for.

Wishing you a fun and festive holiday.


Sources: history.com
Posted by Darcy Black LaBelle at 11:25 AM